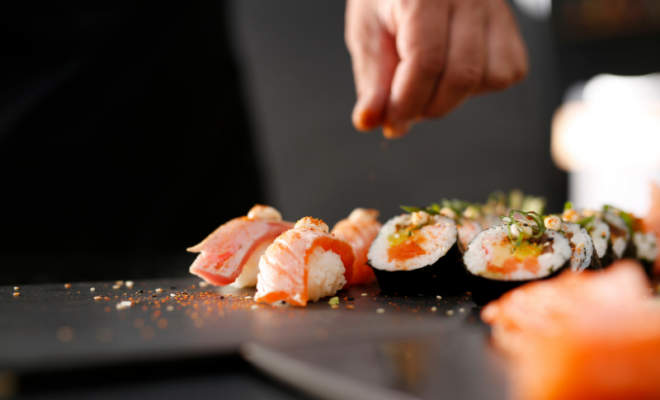 Japanese cuisine is truly known for its expression of delicacy through the selection of fresh, fine raw ingredients that blend with the combination of subtle, dampened Japanese rice. The intricate, meticulous preparation processes Japanese chefs have their hands on further puts Japanese culinary at the top of the world’s most loved foods of all time. Not only Japanese food is made famous domestically, and not only Japanese chefs do reside in Japan. Sushi and its beauty travel to all the different parts of the globe, bringing along its unique tastes and extraordinary flavors to light up the different corners of the world. Years and even decades of practice, understanding, and applying knowledge learned onto hands-on preparation processes, many Japanese master chefs and professionals seek to become masters of sushi, and a king or queen to succeed in the mastery of crafting traditional dishes.

Not only do Japanese sushi chefs reside in Japan – as sushi and its popularity became widespread in the last decade, many Japanese food gurus and fans have become professionals in the crafting of Japanese dishes themselves. Among that is Chef Hidekazu Tojo who lives in Vancouver, Canada.

A Story to Tell

Decades ago when Hidekazu Tojo was still a chef at a small restaurant in Vancouver, Canada, he described how the locals were finical when it comes to the idea of consuming raw food. Raw fish wrapped in Japanese Nori seaweed was a subject of squeamishness; the locals wouldn’t even understand why someone would want to consume something raw – specifically fish that would even smell fishier than usual not being cooked. However, Chef Tojo is very understanding; he knew that all he would have to do is to gradually introduce the beauty of these dishes himself with time. He catered to the tastes and the preferences of the people in the neighborhood, first serving cooked seafood like crabs, Salmon, and Tuna fish. Gradually, he started adding raw fish into the sushi rolls he invented, hiding them under coats of warm, traditionally cooked Japanese rice.

Diners and eaters who are highly open to trying new, unique tastes were quick to adapt to the original tastes of raw fish and fresh seafood, revealed Tojo. He served quality raw fish and seafood, adding them up in his dishes little by little, and creative people who generally understood the art behind his crafts spread the words of praise, bringing in more and more admirers of sushi. Creative people, hippie new generation locals, tourists, and teens spread the words of how delicious and great raw ingredients like Salmon and Fatty Tuna could be, although new to their taste buds. Later, Tojo’s place was filled with people from all directions.

The Japanese Ministry of Agriculture, Forestry, and Fisheries has seen Chef Hidekazu Tojo’s great contribution to truly spread the Japanese culinary culture and traditions through his crafting of delicious Japanese sushi dishes. Among one of the thirteen who was named as the Goodwill Ambassador for Japanese cuisine, Chef Tojo has proved tremendous success as he established network of parties in relations to the Japanese cuisine and food culture internationally.

Catering to the preferences of Canadians and foreigners in general, Tojo made what he would call a ‘Tojo Roll’, which basically is a rice roll, crafted out of crab, avocado, eggs, and spinach – a signature roll everyone has to order upon their arrival at his restaurant. He also came up with ‘Spicy Tuna’, and the idea of using smoked Salmon in his sushi dishes to create his own crafts and at the same time, enable diners to get closer to Japanese cuisine without having to force them raw ingredients right away.