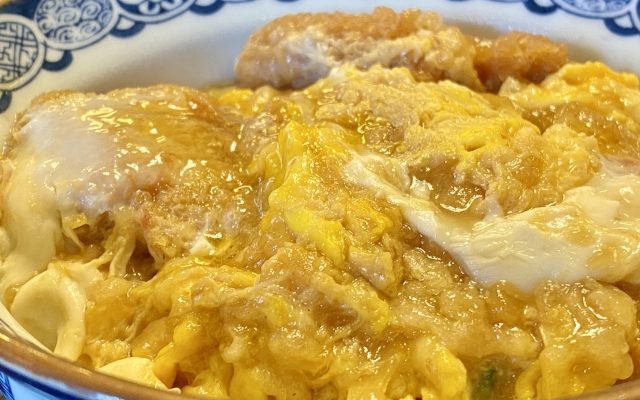 After a hard working day, a hungry man is wolfing down Katsudon at a greasy diner by himself. When we think about Katsudon, this is the image portrayed. Katsudon is the dish for commoners and working class people. Because rice is the main part of a Japanese meal, good manners dictate that it should not be mixed with side dishes. Rice should be eaten plain, and remain white rather than soaked in sauce like it is in Katsudon.

Katsudon is a dish which has everything, including meat, egg, vegetables and rice, all in one bowl.

Katsu means pork cutlet in Japanese. Don is a short form for Donburi. Donburi is a bowl which is bigger than a rice bowl. Usually, a Donburi bowl for rice has a lid to keep its contents warm. The size is similar to a noodle bowl, but a noodle bowl does not have a lid. (Noodles should be very hot, with steam coming out from the bowl as it whets the appetite.)

When you order Katsudon at a restaurant, it usually comes with Miso soup and pickles.

If you have pork cutlet already cooked, Katsudon is very easy to make.

If you think it is too much trouble to make a pork cutlet, you can use store made schnitzel. When we traveled to Vienna, we met a Japanese guy who was the owner of a restaurant in the subway. He started to speak about Vienna Schnitzel. It is good for Katsudon and very big, its shape similar to a Japanese straw woven slipper.

First you cook sliced onion with Japanese soup stock, soy sauce and rice wine. Water instead of soup stock will be fine though soup stock enhances the taste. Cook the onion until tender. Cut a pork cutlet into bite sized pieces. Place them over the cooked onion, and then cook for few minutes. Beat one egg. Pour it over the cutlet and continue to cook on slow heat. When the egg is almost cooked, place everything over a steaming bowl of hot rice. If you prefer the egg to be fully cooked, simply keep it on the heat a little longer until it is. However, runny eggs continue to cook when placed on the hot rice. Garnish with green onion and dried seaweed.

I usually cook more pork cutlet than I need. First I eat the pork cutlet (tonkatsu) as it is. Then, I freeze the rest of them. So when i make Katsudon for dinner, I just defrost what I need.

How to enjoy your time in kitchen with proper set of cutlery?