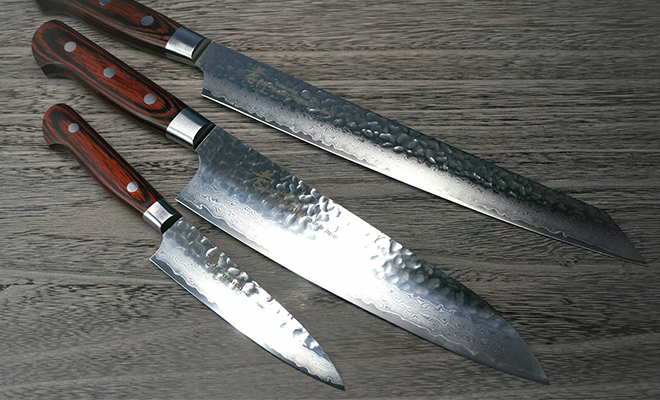 Sakai Takayuki is known for being one of the biggest manufacturers of Japanese knives in the world as well as the top knife maker in Sakai. The company is from Sakai, the samurai city in Osaka
, which is also the birthplace of Japanese sword making and handcrafted Japanese cutlery since the 14th century.

Similar to Japanese swords, Sakai knives are made from high carbon steel and forged using many of the same techniques. Highly skilled craftsmen apply special techniques during the manufacturing process of these knives which are known for its quality, toughness, sharpness, edge-life, design, and functionality.

As the number of high skilled knife craftsman decreased year-over-year, Aoki Hamono Seisakusho Co., Ltd., established in 1982 to continue production of these knives under the Sakai Takayuki brand. Many craftsmen at Sakai Yakayuki inherited their skills and techniques from previous generations, and the characteristics of knives today remains unchanged from traditional knives from decades ago. Today, the company continues to produce excellent traditional Sakai knives and looks to innovate and expand their offerings as they also produce double beveled, western style knives.

Mr. Iciro Aoki is the founder of Sakai Takayuki.

He started selling Sakai knives as they were commonly used and well regarded by Japanese chefs and made of exceptional quality. When the company was started in 1982, the logistics and distribution for Sakai knives was weak. Mr. Aoki decided to deal directly with knife retailers and travelled across Japan to visit every retailer he could, educating them on the quality and characteristics of Sakai knives. As a result of his efforts, Sakai Takayuki knives began gaining a foothold in the Japanese knife market and were soon present in nearly every knife retailer across Japan as demand soared.

He was born in 1972 and joined the industry at the age of 19, following in his father’s footsteps. By 1987, he was certified as a blacksmith master by the Minister of International Trade and Industry. He was also awarded the Green Paulownia Leaves Medal in 1977.

His Aogami single bevel knives are legendary due to his special forging technique, wherein he keeps a lower temperature to avoid decarbonation of the steel, and increases carbide size which keeps the knife from becoming too brittle. Later on, Mr. Keijiro would pass this skill on to his son, Mr. Itsuo Doi, who has been in the forging world for almost half a century. Mr. Itsuo pays attention to every single detail in the forging process, and adopts his father’s techniques by heating up the steel as little as possible, just enough to be able to craft the knife. As a result of this special technique, knives made by the Due family are extremely durable and are made of exceptional quality.

In addition to these two master craftsmen, Sakai Takayuki has also worked with other famed blacksmiths and sharpeners such as Mr. Kenji Togashi and Mr. Koji Tosa. Today, Sakai Takayuki knives are sold in over 100 countries around the world, and its knives represent the quality and history of Sakai knife making. If you’re looking to purchase a high-quality Japanese knife, Sakai Takayuki is one of the best choices for you.